How does data sharing between nodes work?

I’m working with a developer to build a media streaming application on ComposeDB + Ceramic, and we’ve had a lot of early success building a prototype.

One of the key features I’m looking to see from Ceramic is the ability to host a streaming platform that can “subscribe” to other sites running the same software, and vice versa. I was wondering how a scenario like this would work (context: Federation: Arbitrary subscriptions and site-to-site demonstration · Issue #4 · riffcc/ceramic-riff-web · GitHub).

My hope is that when you create a stream, other nodes unrelated to you can consume data from it, and possibly write to it in some way, but I haven’t quite understood Ceramic well enough to know how that works yet despite reading a fair bit of the documentation.

Any pointers/clarification much appreciated. Thanks!

Yes, this is one of the core values of using Ceramic/ComposeDB, is that data is shareable between nodes and applications. With composeDB, all data written belongs to a given data model. Other nodes can index the same data model and then be able to read and write data into that data model, and all nodes on the network that have that model indexed will be able to discover the data.

For individual streams (which correspond to singular JSON ModelInstanceDocuments that belong to a Model), each stream has a DID that is the controller - only the end user who controls that DID can write into that Stream, but they can do so using any node or application on the network.

Does that help clarify things at all?

Thanks for the great question! As Spencer mentioned, this is a big, much needed feature we’re pushing out Feb 15. Appreciate your patience

That sound good! One question @avi @spencer. When a new document is added, eg a comment, with a relationship to another document, eg a post. creates a relationship where the comments appear in the comments field of the post document. Is there a way to break this relationship and unlink the comment given to a post? In other words it would be remove a comment from post

Yes, I am using that same example. I mean when creating a new comment it gets indexed into the comments field of a post given its StreamID, at this point is it possible to unlink a comment and not be indexed to the post it belonged to?

No this not currently supported. There may be more node-specific indexing primitives added over time to support such use-cases, but fundamentally the index acts as a cache to the data of the network.

@paul could they not just set the field in the Comment that references the Post to null?

I have tried with the optional relation and I have not been able to make it work, I will try again and I will tell you. 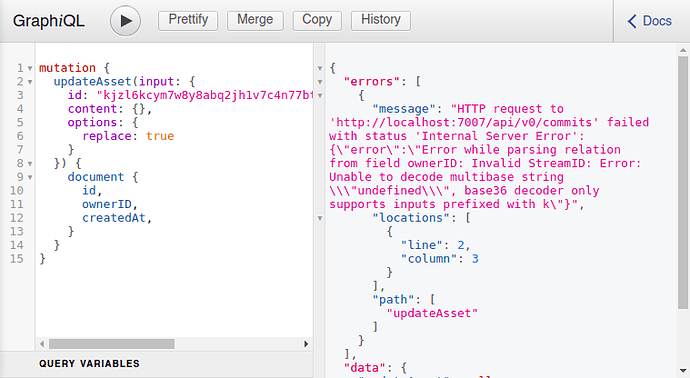 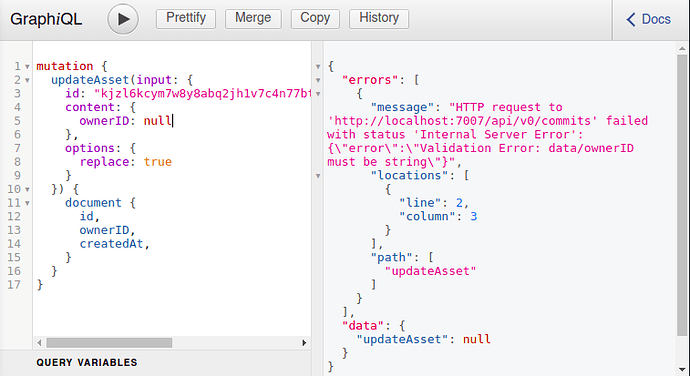 Here the schema
Each Asset has an optional relationship with a User through the ownerID field.

Then running updateAsset with an empty object, either with options.replace: true or not , I get the following errors.